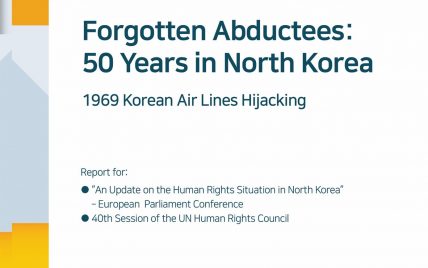 On December 11th, 1969, the Korean Airlines YS-11 plane from Gangneung Airbase bound for Gimpo International Airport was hijacked and changed its direction to North Korea within 10 minutes of taking off. The aircraft was carrying 46 passengers, four crew members, and the North Korean sleeper agent Cho Chang-Hee. The hijacker flew the airplane to Sondok Airfield which lies near the city of Hamhung, North Korea’s second largest city, more than 260 km away from plane’s original destination. It is unclear what happened to the hijacker, although, there are reports that there was a car waiting for him at the airport where the plane landed.

After two months, on the 14 February 1970, 39 of the 50 abductees were returned to South Korea across the Freedom Bridge near Panmunjeom. However, 7 of the passengers, all four crew members and the aircraft itself remain missing. The South Korean president Park Chung-Hee sent a letter regarding the missing 11 passengers of the flights to the UN Secretary-General U Thant on March 9, 1970. He responded admitting to having no power to pressure North Korea. Instead, they should seek support from the International Committee of the Red Cross.

To this day, North Korea claims that the remaining 11 South Koreans have chosen to stay in North Korea out of their own free will. South Korean president Kim Dae-Jung’s sunshine policy towards North Korea resulted in family reunions taking place in 2001. One of the randomly chosen participants was Seong Gyeong-Hui, who was one of the flight attendants on the flight YS-11. When she met her mother in 2001, she revealed that the other crew members were still alive and even living near Pyongyang. While she had not seen the other abductees since their first arrival in North Korea, she mentioned she heard they were faring well.

This year, 2019, marks the 50th anniversary of the Korean Airline YS-11 hijacking. See below the list of missing persons not yet returned (age at the time of abduction).

History of Abductees in North Korea

Since the beginning of the Korean War on June 25th, 1950, DPRK (Democratic People’s Republic of Korea)’s regime abducted approximately 200,000 civilians and soldiers.  In 1946, Kim Il-sung stated that “not only do we need to search out all of Northern Chosun’s intelligentsia to solve the issue of a shortage of intelligentsia, but we also have to bring Southern Chosun’s intelligentsia [to the North].”  Following this time, many citizens were abducted during the Korean War. However, the exact number of missing persons remains unknown. The Commission of Inquiry on Human Rights in the Democratic People’s Republic of Korea states that approximately 80,000 civilians were abducted by DPRK forces during the Korean War with tens of thousands kept when they should have been released.

Following the ceasefire, between August 5 and December 23, 1953, prisoners of war exchanges took place between the North and South in the Operation Big Switch. According to the U.N. Command, 82,000 members of the Korean Armed Forces were estimated to be missing in the DPRK. However, only 8,343 soldiers were returned to the South during this exchange. Of the 82,000 missing soldiers, 13,836 were assumed to have been killed in action while the status of 19,409 soldiers was unconfirmed and they were assumed as missing in action. Many of these soldiers were forced to work in coal mines, factories, and farm villages to help rebuild the DPRK after the Korean War. Approximately 80 prisoners of war have managed to defect back to South Korea, but the others are still detained. The remains of only six soldiers have been handed back to South Korea.

In 1959, more than 93,000 persons were coerced by false promises to move to the DPRK from Japan. However, a few years after they had moved, they were forced to cut off contact with their families in Japan. According to the COI’s findings, many of these people ended up in political prison camps or other places of detention in the DPRK where they were subjected to other crimes against humanity. Over a hundred citizens of Japan, South Korea, and other states were victims of planned abductions by special operations and intelligence agents of DPRK. Around 25 non-South Korean abductions were from Europe, the Middle East and other parts of Asia who were brought to the DPRK to become wives to other foreigners already living in the DPRK.

Although the DPRK has officially admitted to kidnapping 13 Japanese nationals, it is estimated that in total, 17 were kidnapped. Other sources estimate that there are as many as 450 suspected cases of Japanese abductions by North Koreans, with only five returning in 2002. After that, the only sign of life of the Japanese abductees was the North Korean regime’s declaration of the death of eight of them. To support these claims North Korea has handed over several things to the Japanese officials including the remains of the dead Japanese abductees. However, the Japanese government evaluated the remains and deemed them unreliable as they could not be identified.