From a young age, children are forced into labor, including agricultural labor support, item collections and construction work. Children in prison camps, orphanages, and relief shelters are also subject to arduous labor.

Agricultural labor support refers to mandatory farm labor such as sowing, weeding, rice-planting, transplanting “nutrition jars,” and harvesting. The government mobilizes children through the education system and sends them to local farms which are partnered with a school. Farm work is considered an essential component of the school curriculum, and the work is unpaid. There are two types of agricultural labor support: local and long term.

Long-term Agricultural Labor Support is generally performed by high school students. Students are required to work on a farm collective for one or more months, typically from thirty to forty days in the middle of the semester. Students travel to a local or distant farm determined by the government or the school, and live there while completing the farm-related tasks given to them. Lodging and sanitation facilities are usually very poor. Demand for labor is highest in the spring, summer, and fall.

Local Agricultural Labor Support involves labor on farms close to the students’ schools and homes. Over the course of the year, students are given different tasks depending on the season. The work is strenuous, exhausting, and time-consuming, and becomes increasingly onerous as the students get older. Students invariably spend more time performing unpaid labor on farms than they do studying and receiving a proper education.

The government forces students to collect an array of items, some of which are nearly impossible to find in North Korea. For example, no one can find a piece of scrap iron, let alone over 10 kg, because there is almost no scrap iron in North Korea.

In addition to the annual Children's Initiative, there are other government-run item collections for students. The umbrella North Korean term for all government orders relayed to students is "pochi," which broadly means "facilitating a project by dividing team tasks and sharing operations manuals". Pochi not only includes orders of item collections (such as the Children's Initiative), but also monetary donations and societal and political assignments (such as participating in political events, cleaning statues, supporting the People's Army and the Construction Site Support Project.)

In addition to Agricultural Labor Support and Item Collections, students must also participate in construction projects and performances on national holidays, such as the birthdays of Kim Il-Sung, Kim Jong-Il, and Kim Jong-Un, and other special occasions.

Students are mobilized to help build municipal infrastructure, school buildings, railroad repair and even private housing of school personnel. Additionally, construction work required to newly build, maintain, and/or repair the school edifices is often completed by the students. Not only are they required to participate in hazardous construction labor, but they must also make or bring the materials necessary for construction at their own expense.

*the one-week period where students are expected to dedicate their time to working, without attending classes at all.

Child Labor Outside the Education System

North Korea differentiates its prisons based on the crime convicted. Those who are accused of ideological insubordination are sent to a “kwan-li-so.” Kwan-li-sos are concentration camps primarily for those accused of political crimes. They are enclosed by electric fences and barbed wire. Up to 120,000 people live in each of these camps. Children are treated with particular cruelty, but those who manage the camp keep them short of dying, knowing that they are indispensable as the next generation of laborers. Even though the North Korean government firmly denies the existence of kwan-li-sos, there are five such known camps.

Children suffer from all kinds of child labor existing in the North Korean society, and additional labor needed at the camp. Despite their state of near-starvation, children are forced to spend most of their waking moments working where they have to meet certain quotas. Like the schoolchildren outside the kwan-li-sos, the ones inside are required to collect scrap items. However, children in the kwan-li-sos typically collect a considerably greater amount because the authorities treat them more harshly. Additionally, children are required to perform manual labor. Children are given different tasks according to season. 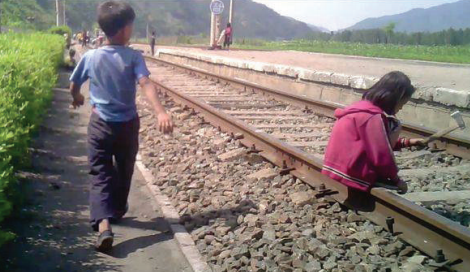 Each kwan-li-so is large enough to have several schools. However, the quality of education in the kwan-li-sos is far worse than in the schools in normal society. In the standard school system, a student graduates after three years of middle school and three years of high school. The camp only offers schooling through middle school, where basic Korean language and arithmetic are taught by prison guards instead of trained teachers. As soon as the children have a rudimentary education, they are deemed ready and immediately sent to the coal mine or workplace.

The children who live in an orphanage are forced to live a regimented, military-like lifestyle and are constantly subjected to the whims of their supervisors. Relief shelters are makeshift orphanages, with significantly less resources. The majority of the children who live here are kkotjebi, who are homeless youth found begging on the streets. The government claims these establishments are meant to protect and manage homeless children. The living conditions in a relief shelter, however, are no better than a detention facility.

As with most countries which forbid severe corporal punishment, North Korea has also implemented regulations against it. However, these laws are not enforced. Not only are North Korean children exposed to abuse by their teachers but the perpetrators do not face any consequences. It is very common that teachers will ruthlessly beat students who fail to attend or do their work properly. Students who do not attend the agricultural labor support or complete the item collection are both rebuked by their teachers and other students during a Struggle session (sa-sang-tujeng) in which students accuse one another of capitalism and reactionary ideology. Additionally, they are exposed to open criticism from their peers through a social system called “saeng-hwal-chong-hwa.”, translated as “life review session”. It is a weekly gathering to review and reflect on one’s ideas and acts according to the teachings of Kim Il-Sung, Kim Jong-Il or Kim Jong-Un, or the Ten Principles. During Saeng-hwal-chong-hwa, certain students are targeted by the whole class and bombarded with scathing remarks.

Apart from physical and verbal punishments, there is also punishment from peers. Classmates discipline each other mainly through bullying. Their peers treat them in a hostile manner because upon seeing the teachers, to whom they look as role models, act openly antagonistic towards the poor students, they start to believe it is acceptable to act in the same way. As Saeng-hwal-chong-hwa is a system that makes North Korean children accustomed to scapegoating the weak; the public shame their peers experience elicits apathy, not sympathy. This apathy sometimes intensifies to resentment and results in bullying.

The children in prison camps are physically and verbally punished. The children in prison camps spend the majority of their lives confined within electric fences and are taught to believe that this is as good as it will be. The cruel treatment and excessive labor are close to slavery and the prisoners are treated like animals. Sometimes, without any reason, the teacher takes it out on the kids and beats them over small mistakes. But the teacher is not the only one to discipline the student. The responsibility is instead passed on to a subordinate, the class chairperson (student). Usually the teacher beats the chairperson and makes him beat the other children.

The authority figures would make the children run outside barefoot, thinking the children would run away if they had shoes. It is common for the children to be excessively abused as well in the orphanages and relief center. The workers would hit the children with wooden sticks and basically everything else that they could get their hands on.

While the schools, prison camps and orphanages are places where children are gathered and mobilized by the masses to work, there are more but less obvious spaces that exploit children to work. An example of this are detention centers. Many children end up in detention centers where the same work is done just as in the schools, prison camps and orphanages. Additionally, there are other places where child labor is used in North Korea. There is hidden footage of children, alongside adults who work to clear snow in an upscale ski resort. Without proper technology or machinery, the roads can only be cleaned with manual labor. The child workers are at great risk while the rich North Koreans ski with no remorse.

The mass games in North Korea are known to require a lot of manpower. During the Arirang festival about 50,000 children turn color cards at the same time to create a “animated” mosaic-like background. For Arirang performances especially, children practice tirelessly for 6-12 months. Casualties are inevitable when they practice for hours under the scorching sun. Children are usually summoned for the celebration of the birthdays of Kim Il-Sung, Kim Jong-Il, and Kim Jong-Un with numerous of individual performances across the nation, ceremonial parades, visits to monuments, songs, and choir concerts.

The North Korean government in addition regularly assembles children through the school system for political campaigns and events. They are mobilized to march with posters and shout profane slogans for hours.