PSCORE spoke at the UN special session on the DPRK 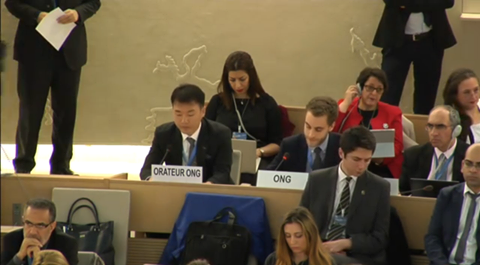 On Monday, Young-il Kim, Executive Director and Founder of PSCORE, spoke at the UN special session on the DPRK, where he sought to draw attention to forced labor of children. As an NGO with ECOSOC special consultative status, we are extremely proud to be able to report to the United Nations Human Rights Council, and hope that Young-il’s words and our efforts can help to make a difference in the exploitation of children in the DPRK.

A full transcript of Young-il’s oral statement can be found below:

First, I would like to thank the Special Rapporteur Tomas Ojea Quintana for his support in the improvement of North Korean issues.

Today I would like to address the issue of children’s rights in North Korea. In its reports to the UNCRC, the North Korean government holds in high regard its system of free education for its students, but in reality, the government’s highest priority is the idolization of its leaders and to foster its youth into a means of preserving the current system of government.

The children’s rights laws of the North Korean government strictly prohibit the exploitation of children, but they are in no way being practiced. Every year, children older than 14 across the country are dispatched to farms in rural areas for a month-long “agricultural labor support” program.

Children are exploited in numerous areas of the nation’s infrastructure development, such as the construction of schools and other buildings. Recently, several Chinese companies have also been ordering goods, like hair accessories and eye-lash extensions, from the North Korean government in an effort to secure foreign investment. Children are chosen for this meticulous work simply because of their small fingers.

Despite severe famine and human rights violations by the government, North Korean children present a façade of happiness that has been drilled into them by the government. We greatly hope for measures to be taken to compel the North Korean government to honor the rights of children and to create an environment where they can truly be happy.