On May 2021, Bada Nam the Secretary-General of PSCORE had an interview with Saejowi. 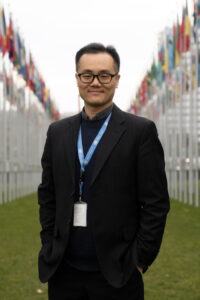 Bada Nam is a South Korean-national who has been working at PSCORE since 2010. He organizes public and private events, fundraisers, and intern projects. Using his background in international affairs, Bada works as a North Korean human rights and Korean reunification activist. He has contributed to various U.N. human rights mechanisms since 2012. Bada has worked on numerous publications, reports, and campaigns pertinent to the humanitarian crisis in North Korea.

Fine dust flowed through the streets of Seoul, and I closed the windows firmly, allowing only the stray ray of sunlight to enter the room. In a few minutes, I would be speaking with Bada Nam, the secretary general of PSCORE, an NGO in Seoul.

PSCORE stands for “People for Successful COrean REunification.” The organization had adopted the spelling of “Corea,” as Korea had been called before the division of the Korean peninsula, to emphasize its goal of reunification.

My younger sister, Lydia, had worked as an intern at PSCORE for several months, and I had seen secondhand how tirelessly the organization supported North Korean defectors in a variety of ways, whether through outreach events or one-to-one English tutoring. “Mr. Nam really devotes himself completely to this work,” she often remarked to me in awe. “I don’t understand how he can keep it up, day in and day out, with such devotion. He’s practically given up his whole life to help North Korean refugees, for what seems like very little reward.” Unlike many larger NGOs, which have their own full-time staff, PSCORE operates mostly through Mr. Nam’s full-time work and a team of volunteers from all over the world.

I turned the camera on and entered the Zoom call. We had agreed to speak online due to the continued danger of COVID-19. Mr. Nam appeared onscreen and greeted me calmly. A large map of the Korean peninsula hung on the wall behind him. He was a quiet man who spoke in a measured manner throughout the entire conversation, without any sudden bursts of excitement or noticeable fluctuations in tone. However, a thin vein of steel seemed to lie behind his simply spoken words: his words contained a strength that came not from mere whim or unreasoned emotion, but a decade of hands-on experience.

“Thank you so much for making time to speak with me today,” I said warmly. “Can you begin by telling me about the general activities that PSCORE engages in to support North Korean refugees and reunification on the Korean peninsula?”

He nodded. “PSCORE primarily engages in three sections for work,” he replied. “We promote human rights on the Korean peninsula, put on reunification talks and education programs, and support North Korean defector resettlement. For human rights, we focus mostly on human rights in North Korea by creating research papers, interviewing defectors, creating video clips and educational material, and sharing these to our social media. As a UN consultative NGO, we also bring these issues to the UN human rights council or general assembly. You can see our previous reports and projects on our website. Recently, we held a model UN session on North Korean human rights.”

“Our participants were mostly university students, but we also had some high school students join in. It was quite successful. Other than that, we try to raise awareness in the international community, and offer one-on-one tutoring for North Korean students.”

I nodded. My sister had also volunteered as a tutor for PSCORE, and she had greatly enjoyed the experience.

“Our tutors mostly teach English, but we also help out with math and other subjects if necessary. Since the pandemic began, we’re also providing after-school video classes on arts and crafts, as well as flower arrangement classes. We also hold workshops with North Korean defectors who used to be teachers in North Korea.”

I listened to their various programs, impressed at the diversity and scope of their activities. “That’s wonderful, Mr. Nam! PSCORE is supporting the North Korean defector community in so many different ways. I’m curious: what sparked your own interest in the reunification movement and North Korean defectors?”

“I was always interested in human rights,” Mr. Nam said. “I’ve joined PSCORE since 2010. Before that, I was a normal salaryman for ten years, but I kept up an interest in human rights, and the more I learned about North Korea, the more I felt the need to help out. North Korea is our neighbor, after all, and sometimes even our own family. The activities of PSCORE are based on this interest.”

“It must have required a lot of courage to transition from working at a company to leading a nonprofit organization,” I remarked.

“Well…I don’t know. While working with normal companies, I kept up an interest in human rights, and realized I was not that into just making money. If you are willing to forget about your salary, it is possible.” He smiled wryly.

I thought back to my own experiences at Saejowi and the people I had met in the reunification movement, then about my sister’s words about how Mr. Nam had devoted himself completely to PSCORE’s activities. I told him about the advocates and professionals I had met who had grown very cynical about any prospects of Korean reunification. “Many complain that they won’t see reunification in their own lifetimes, and that working with North Korean defectors can be difficult and unrewarding. What keeps you going?”

He laughed slightly. “I kind of understand why people could get skeptical on reunification issues. However,” and his eyes were serious as he spoke, “it’s not a matter of taste. It’s a matter of what we must do. So that’s something we just focus on and do.”

He paused, then went on. “Reunification means different things for many people. Many people think reunification is just about having two countries become one country again. However, reunification is not a one-time event, something we can split into a before and after. It’s not just about political issues. I want people to focus more on the interactions of human beings, instead of the political issue only. I want people to focus on human rights issues.

“I think reunification is what happens between people, between North and South Koreans, individuals getting to know more about each other and living together. This is also a kind of reunification. So in that sense, what we are doing is not hopeless. In that sense, we are coming near to reunification.”

His calmly spoken, insightful words made me remember why I had begun supporting North Korean defectors in the first place as well. It wasn’t simply a matter of how politics would play out or when our countries would unite. It was the urgency of every individual life that could change for the better. I jotted down his words—It’s not a matter of taste, it’s a matter of what we must do. We are coming near to reunification—and promised myself that I would keep them in my heart whenever I grew dejected or hopeless in supporting North Korean human rights.

“Thank you so much for your thoughtful answers,” I said sincerely. “Now, my last question is based on the theme of our literary journal. What makes life livable for you, Mr. Nam?”

He paused as he considered his answer carefully and judiciously. Then he spoke, a slight smile crossing his lips.

“The most important thing for me is my family, but…you know, with marriage, and having kids, there’s not much time for me to be thinking about what makes ‘my’ life livable…so I guess my answer would be, I’m just trying to do my best every day. To enjoy my life and work harder and…yes. To just try my best every day.”

He went on slowly: “I know what I can do, and what I’m not available to do. So I am trying to expand what I can do every day and to engage more with this society. But…we’ll see. I used to set up a plan for how to live every year, but I realized that no one can live according to their plans. So now…all I can do is to just try my best every day.”

I smiled, for these simple words carried the weight of Mr. Nam’s steady and diligent life. I remembered that during her last days at PSCORE, Lydia had been struck by Mr. Nam’s words as he watched countless interns and volunteers come and go each year.

“Many of them have gone on to important careers in the UN as humanitarian workers and civil servants, and I am happy for them,” he had said. “I am glad I could support them in their beginning stages. As for me, I will stay here and continue to be the soil in which they can grow and blossom.”

By simply doing his best every day, Mr. Nam had kept PSCORE alive, and kept the issue of human rights alive. He had been the soil in which the hope of reunification could continue to blossom.

If you want to support us and our work donate here: Donation.